It is with utmost requirement for the 5 times Ballan D’or winner C. Ronaldo to currently participate in the Champions League considering his career duration left.

The Attacker will be needing more achievements and awards amid his career-ending which triggers his demand to depart from his golden team Man United as they failed to qualify for the UCL group Stages.

And looking at the transfer window closing, Ronaldo openly displays his mind and ambition of playing in the UCL, which will only be done by departing to a qualified team.

Cristiano Ronaldo remains hopeful of an exit from Manchester United this month and Atletico Madrid offers a potential escape route for the Portuguese star with Joao Felix now discussing his Portugal international teammate. 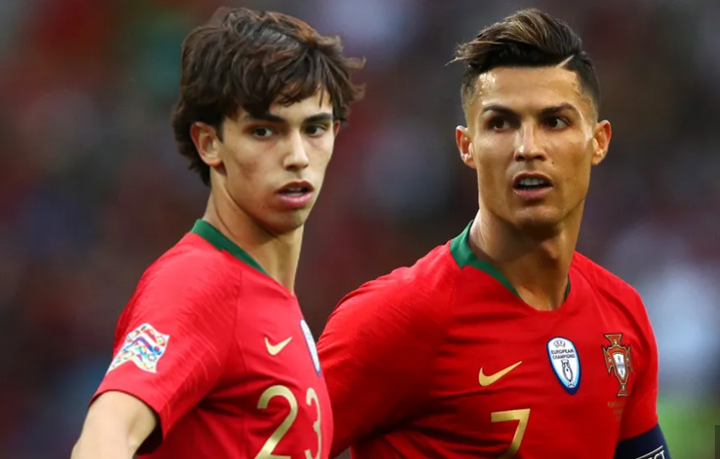 He remains determined to depart the Red Devils this summer after just one season back at Old Trafford following his high-profile return from Juventus last year after 12 years away.

He has been attempting to force through an exit for two months but no move has yet been concluded with less than a week remaining in the transfer window.

The 37-year-old was dropped to the bench for United’s spirited defeat of Liverpool on Monday. There was a fresh snub for Ronaldo at half-time too, as Erik ten Hag introduced Anthony Martial for his first appearance of the season to fill the central attacking role rather than look to the Portuguese superstar.

The list of possible destinations for Ronaldo has been limited with Atletico Madrid a strong candidate to secure his signature.

Despite the Portuguese superstar’s links with Real Madrid – where he is the all-time record club goal scorer with a scarcely believable 450 goals in 438 appearances – he is open to joining their city rivals.

Atletico fans have protested against the possible signing but that is not detracting boss Diego Simeone, who would love for the club to land a player he has always greatly admired.

Simeone believes that Ronaldo could have a similar impact to Luis Suarez – the Uruguayan joined Barcelona in 2020 and subsequently fired them to the league title in his debut season.

Simeone would love to have Ronaldo so much that he has been described as his ‘dream’ signing, and the Spanish club would allow at least one forward to join United in a separate arrangement.

Morata and Cunha are among the players who have been linked with a potential switch to United.

Joao Felix has now commented, as per Marca, on Ronaldo’s situation at Old Trafford, and whether it may have an adverse impact on the Portuguese international set up ahead of the World Cup in Qatar this winter: “Cristiano is always Cristiano, even if he is not playing now.

It is always good, and the fact that Manchester United is not doing well and he is not playing. I don’t think it affects us.”

The Atleti forward also said he found it “difficult to adapt” initially to Diego Simeone’s Atletico Madrid side following his 2019 switch from Benfica, but now he feels “more comfortable” with the side’s style of play.

Joao Felix added: “At first it was difficult because I wasn’t used to having that pressure, but over time, with the right people around me, with the club, the situation normalized.

I can perfectly live with that.” He added that Simeone, is “one of the most special coaches in football” and that he manages to transmit his passion “to the players and the fans.”