He said that the Player Had so far shown no disciplinary quality towards him, he noted that after his request for a move out since the Club did not make it to the Champions League Group stages, Cristiano Ronaldo has failed to comply in any productive manner.

This resulted in keeping him out of the First 11 line-up for the first League game till after the First Half which ended up in a loss for the team.

According to The Times, Ten Hag is willing to sell the five-time Ballon d’Or winner as he is unhappy with the veteran forward’s behavior and attitude. The Dutchman does not believe the 37-year-old is motivated to help the Red Devils succeed this season and is therefore willing to sanction his departure.

Cristiano Ronaldo joined United from Juventus last summer for an initial fee of €15 million with add-ons. The Red Devils signed him in the hope that he would be able to lead them to their first Premier League title in nearly a decade. The striker enjoyed an impressive 2021-22 campaign, finishing as the club’s top scorer with 18 goals in 30 league games.

Despite his consistency, United endured a dismal campaign as they finished sixth in the league table, thereby failing to qualify for this season’s Champions League. Failure to qualify for Europe’s elite competition and a disappointing summer transfer window resulted in Cristiano Ronaldo seeking a move away from Old Trafford.

The former Juventus star opted out of United’s pre-season tour of Australia and Thailand due to ‘personal reasons. However, Ten Hag reiterated his desire to keep hold of the Portugal international as per ESPN.

He was named on the bench for his side’s Premier League opener against Brighton and came on as a second-half substitute.

Cristiano Ronaldo was included in Ten Hag’s starting line-up for the game against Brentford. United suffered a humiliating 4-0 defeat to the Bees, after which the Portuguese forward was visibly infuriated and snubbed a handshake from Ten Hag after the game.

The veteran striker’s poor attitude has led to the Dutch tactician giving the green light for his sale. The Portuguese icon is reportedly waiting to see if the owners and executives share the same views as the former Ajax manager. The 37-year-old’s departure could have massive financial implications for the club due to his commercial value. 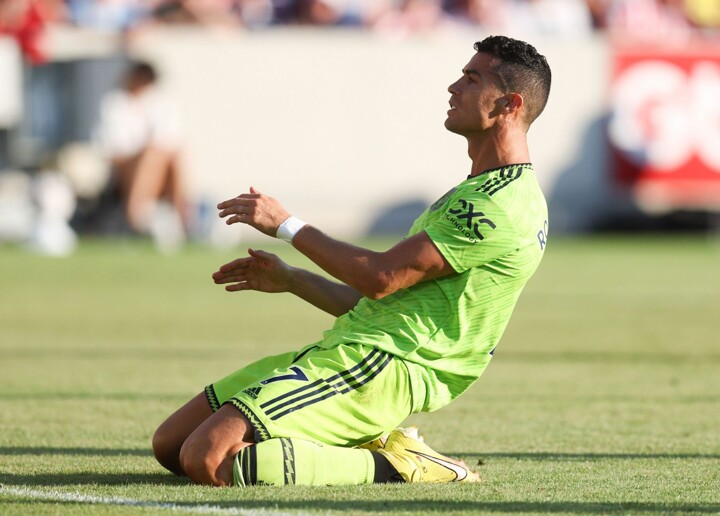 As per the Indian Express, Cristiano Ronaldo is keen to leave United but is yet to receive any concrete offers. Bayern Munich and Chelsea were linked with the 37-year-old but decided against pursuing his signature.

According to The Times, Atletico Madrid has emerged as a potential destination for the Portuguese star. Diego Simeone could view him as the ideal replacement for Luis Suarez, who left the club after the expiration of his contract in June.

The Spanish giants could also offer Alvaro Morata or Antoine Griezmann to United to facilitate a deal for Ronaldo.

The Red Devils could prefer to sign Morata over Griezmann as the Spaniard enjoyed an incredible pre-season and scored a brace in Atletico Madrid’s 3-0 victory over Getafe in their La Liga opener.