The blues has been keen to be keeping hardworking and capable players with full passion and ambition to play in Stamford Bridge. James Reece is one such product needed and demanded by the Club.

James Reece is a wonderful player with many capabilities and qualities that polish him to be as good as he is today.

Chelsea mentioned that; James Reece is a Cobham graduate who first trained with us at the age of six, James has emerged as one of the best young players in the game. His skill, crossing ability, positioning, and athleticism mean he is as comfortable in midfield or in a back three as he is at wing-back or full-back, and has now committed to the club until 2028, Blues fans can enjoy James’s prodigious talent for many more years to come. 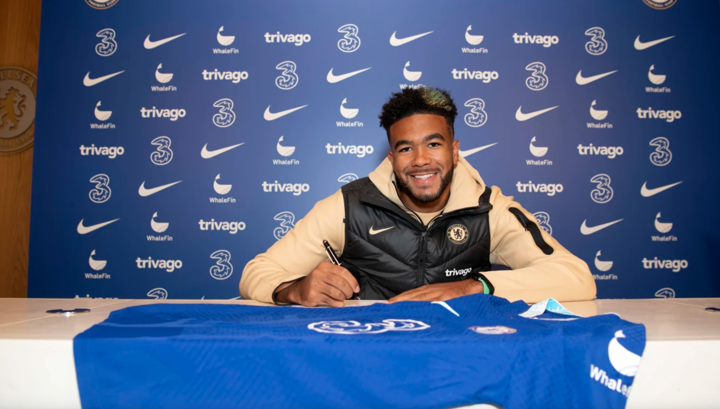 On agreeing with the new contract, Todd Boehly, chairman, said: ‘We are thrilled to give Reece a new long-term contract at Chelsea. He is an outstanding player and a true Chelsea man, and we are all looking forward to watching him continue to flourish at Stamford Bridge.’

James, who turns 23 in December, progressed through our development center program and flourished for our Academy teams before taking his first steps in the professional game in 2018/19 on loan at Wigan Athletic. He was a huge success, and cleaned up at the Latics’ end-of-season awards, receiving an astonishing 96 percent of the votes in their Player of the Year poll.

He had to wait until September 2019 to make his Chelsea debut after picking up an injury on international duty that summer, but he marked the occasion, a Carabao Cup third-round tie against Grimsby, with a superb long-range strike. James was a consistent presence in Frank Lampard’s Chelsea side thereafter, proving equally adept at right wing-back as he did at full-back. His personal highlight was the moment he became our youngest goalscorer in the Champions League with an equalizer against Ajax, capping a remarkable comeback from 4-1 down and sparking delirium inside the Bridge.

James started the 2020/21 campaign by scoring a stunning goal at Brighton and finished it an England international with a Champions League winner’s medal in his hand. He was one of many star performers in Porto, providing further evidence of how comfortable he is on the big stage.

James’s attacking threat from right wing-back only increased last season. Although it was interrupted by a muscle injury that kept him out for the best part of three months, he still scored six goals and delivered 10 assists in all competitions, including sweet strikes in comprehensive wins against Arsenal and Juventus, and a blockbuster brace against Newcastle at St James’ Park.

He also netted the decisive penalty in two Carabao Cup shoot-outs, so it was no surprise his absence was keenly felt in the early months of this year. When he returned to fitness, his quality and calmness in playing out from tight positions caught the eye in our thrilling win at the Bernabeu when Chelsea so nearly overcome a big first-leg deficit. Once again, the European football community sat up and took notice.

James has already racked up 128 appearances for the Blues and with this new long-term contract, he will significantly increase that tally in the coming years. Congratulations, Reece!

Behdad Eghbali and José E. Feliciano, co-controlling owners, said: ‘Reece is a very special footballer and one we love having at Chelsea under our ownership. His blend of physical and technical ability is a huge asset to our team now and for many years to come.’

Reece James said: ‘I am over the moon with my new contract and I’m thankful for the fans, the new ownership, and everyone involved in the club. I cannot wait to see what the future holds, and I am sure we will have the chance of winning many trophies.

‘I grew up supporting this club and I’ve been here since I was a six-year-old. I put pen to paper on a new deal because this is the club I want to be at. I’d like to say a special thanks to the fans, I am here to stay and we have a bright future ahead of us.’